I was going to get back in the habit of writing here and I didn't.  Life happens.  I wondered today why I was reluctant to write.  I realized that the reasons are many, excuses are numberless but the bottom line is I am ashamed of how far down I fallen again.  Every year I promise myself with self care and creative problem solving I'll do better - I didn't.  My daughter posting a picture of my mother on Facebook to celebrate her birthday hurt so much.  I feel like she chose my mother over me.  I use depression to stop the anger that hides the hurt.  A powerful chain reaction that has me spiraling out of control again.  Stop the boat now. (Charlie and the Chocolate Factory.)

It doesn't matter who any one chooses.  I am choosing to be with people that want to be with me.  I am choosing to take a break when I need one.  I am choosing humble acceptance that sometimes you are rejected by those you want to love.  I figured it out that I spent half my life with people that don't want me in their life.  I feel jealous when someone writes about their mother being their best friend.  My mother isn't and I'm not my children's best friend either.  Sometimes I wish I didn't reconnect my emotions in counseling.  Sometimes the sadness hurts so much.  Then I get blamed and shamed and told that if I was different then it would all be different.  Well, I'm not different.  Now what?

Getting back in stride

I noticed something about myself.  I get into a routine I tend to cope better than breaking up my schedule and taking breaks.  However, when I break my routine and ask myself why am I doing what I am doing, if the answer is because I always did it, I need to reexamine my priorities.  I miss writing daily blogs.  I missed reading many of the other posts.  I missed not feeling connected.  I struggle with people to people communication.  I learned this is more about being an introvert than anything to do with PTSD.  How I connect with people is through my computer.  I can post about ideas and events and I decide if I want to respond to others that are also sharing.  Sometimes my best choice is to scroll on by.  I am working on the issue that not everything I am asked to do is the best use of my time or my job to carry out.  Sometimes it pays off to speak up for myself when I know that something is not the way it is supposed to be.  Lots is happening that I am struggling with keeping up.

Thought for the week: Comes from Digital Photo Academy....I like their group and the ideas they share.  Enjoy being an artist.....create your life.... 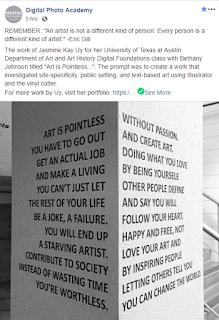 What did I learn?  I felt I was neglecting my responsibility to share what I know.  I fought long and hard and learned a few things that I think are helpful to others.  I miss sharing my progress.  (Very narcissistic of me.)  But the deal is, I don't know everything.  Sharing then others add their two bits or what they learn and I grow from the experience.  I felt like I was spinning my wheels but I actually made some awesome progress.

At my job, I watched it morph over the last few years until I didn't feel like I was doing my job any more.  This has happened in other jobs I had.  The jobs morphed so much I would never apply for what they were having me do later.  The catch, each semester I sign a document saying I am doing my original job.  Kind of tough when people higher up try to change things without the OK of those overseeing the funding.  I made an appointment.  Appropriately shared my concerns then let them come up with a solution.  I pointed out that the wrestling match going on was way above my pay grade.  I learned today that they are going to have me going back to what I was hired to do.  I am so impressed it worked.

This week I took a class on using circle discussions for a group.  It is fairly formal but I was astounded at what we ended up sharing.  Let me rephrase that, I was astounded at what I ended up sharing.  I opened up to a group of people that normally they are doing good if I say hi to them.  The whole peopling thing can be exhausting for me.  I was impressed.  I believe this would be a great way to discuss issues in families, classroom or work places.  I don't believe it would be easy but I do think it would be worth it to open channels of communication over time.  It is not a once and done project. A bit formal but with healthy boundaries and creating a feeling of safety sharing becomes fairly open.

How are you all doing?  Baby steps and cha-cha's both make progress.  Falling flat on our face moves you forward too.  Hugs and cheers and glad to be back. 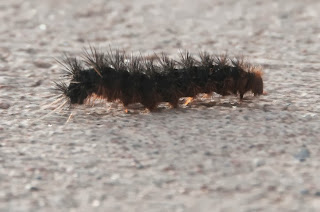 Inching along
Posted by Ruth at 11:53 PM No comments:

Call of the Void 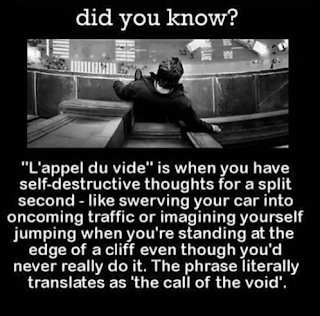 I was shocked to find out there is an actual name for these random weird thoughts that I have ZERO desire to act on but traipse through my brain uninvited and quickly escorted out.  I call the deep dark depression that ruled my life for many years, "The Void."  It makes sense to me now that someone posted that it exists as a description for others.
I can't give credit to where this came from because the person posting it is in a by invitation only group.  Looking up the information on Call of the void, French brought up several links sharing the same information.  Random bits of information that may or may not be helpful.

Have a good day.

Pointed in the right direction

Today was a good day.  Sometimes I just need to be pointed in the right direction. 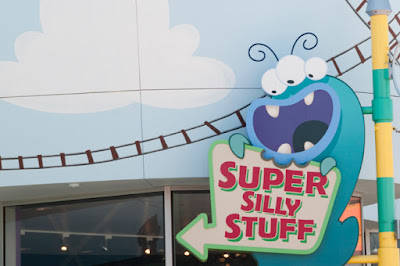 
I don't often respond to controversial current events because I learned long ago that my perspective is out of step with most and ridiculed by others.  I haven't written for awhile because this post is just boiling my brain and I was trying to avoid writing anything about it.  My thoughts popped up in a comment and a flood of rage followed.  Containing that rage was my first mission.  I think I am ready to say what I want to say.

A few years ago, an individual, my boss, hated me and his response was a smear campaign accusing me of things that never happened with zero evidence.  In defending myself I looked unreasonable and the more I denied the allegations the more they implied my denial was proof that I did what he said I did.  The smear campaign worked, I lost my job because of a vindictive person with no proof.  In the current events, statutes of limitations are long past.  Who he is now is totally lost in the cesspool of accusations.  I don't know who is lying and who is telling the truth.  I know how it feels to have my named smeared with no proof.  It is devastating on so many levels. Anger rages and people point out that so much denial must mean there was some truth in all the mess.  I feel deep sympathy for the gentleman.  My feelings about the lady are negative, extremely negative.  Her purposes are quite clear to smear his name and reputation.  I actually am terrified that someone from my past will come forward with accusations and swearing I did wrong.  I am so far from what I was it would be painful to have my past used to hurt me again.

Humans screw up.  Sometimes badly.  However, to me, it is more important what they learned and who they became.  Focusing only on the past does not allow a person to be who they have become.  I'm sad that such tactics were used.  It hurts more people than it helps.  Imperfect people run this Nation and every other nation because we are imperfect.  I dread election years because it seems to bring out the very worse then we have to vote for one.  Heavy sigh.  I pray for all involved especially his children.
Posted by Ruth at 10:49 PM No comments: