My sister posted one of my favorite stories about entering Heaven. Physical distancing continues, I'm still paid, I pray for those that are not.  Yes the illness is slowing sadly for some people at a very high cost and those with loved ones that died, we didn't do enough.  I tell people that planet Earth is a testing ground not a country club and this hardship is advertised more than most.  Lots of hard things are happening but one virus is getting all the attention.


A man and his dog were walking along a road. The man was enjoying the scenery, when it suddenly occurred to him that he was dead.
He remembered dying, and that the dog walking beside him had been dead for years. He wondered where the road was leading them..
After a while, they came to a high, white stone wall along one side of the road. It looked like fine marble. At the top of a long hill, it was broken by a tall arch that glowed in the sunlight.
When he was standing before it he saw a magnificent gate in the arch that looked like mother-of-pearl, and the street that led to the gate looked like pure gold. He and the dog walked toward the gate, and as he got closer, he saw a man at a desk to one side.
When he was close enough, he called out, 'Excuse me, where are we?'
'This is Heaven, sir,' the man answered.
Would you happen to have some water?' the man asked.
Of course, sir. Come right in, and I'll have some ice water brought right up'.The man gestured, and the gate began to open.
'Can my friend,' gesturing toward his dog, 'come in, too?' the traveller asked.
'I'm sorry, sir, but we don't accept pets.'
The man thought a moment and then turned back toward the road and continued the way he had been going with his dog.
After another long walk, and at the top of another long hill, he came to a dirt road leading through a farm gate that looked as if it had never been closed. There was no fence. As he approached the gate, he saw a man inside, leaning against a tree and reading a book.
'Excuse me!' he called to the man. 'Do you have any water?'
'Yeah, sure, there's a pump over there, come on in..'
'How about my friend here?' the traveller gestured to the dog.
There should be a bowl by the pump.'
They went through the gate, and sure enough, there was an old-fashioned hand pump with a bowl beside it. The traveller filled the water bowl and took a long drink himself, then he gave some to the dog.
When they were full, he and the dog walked back toward the man who was standing by the tree.
'What do you call this place?' the traveller asked.
This is Heaven,' he answered.
'Well, that's confusing,' the traveller said. 'The man down the road said that was Heaven, too.'
'Oh, you mean the place with the gold street and pearly gates? Nope. That's hell.'
'Doesn't it make you mad for them to use your name like that?'
'No, we're just happy that they screen out the folks who would leave their best friends behind.'
~Anonymous Author and Artwork
Posted by Ruth at 9:49 AM No comments:

Solitude how to connect...

The World is asked to do social distancing.  Some people are struggling.  Interesting thing to me is I am used to spending hours alone.  I don't mind.  I usually go to the store at odd hours so I won't be jostled or approached by other people.  Now, I can go at any hour and people keep their distance, no one considers me rude now.  Here is the weirdness, I really want to be able to go out and hug somebody.  This so unlike me.  I usually prefer at a distance or a simple side hug.  I am beginning to think that the rebellion that my counselor tried to provoke years ago is finally starting to set in.  Great, just when I am supposed to behave is now when I don't want to.

So today I focused on contacting people on Facebook.  Wrote a few emails and kept my phone by my side so I could answer almost immediately.  I attended a teacher meeting online and by dinner time, I felt better.  I connected without stepping out of my door.  Connections are important.  This is why abusers use our natural need to connect as a way to manipulate, isolate and abuser their victims.  Victims then associate connection with abuse.  Their natural needs become a "bad thing" used to harm them.  It is cruel.  However, as we move away from abusers and find a way to distance ourselves we are better equipped to create an environment where needs can be met and not feel abused.  This process will take practice. Like every behavior, social connection is a skill most people learn as children.  Cool thing, we can learn these same skills as adults.  Cheering for everyone, may you stay safely separated but connected. 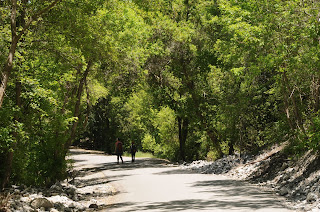