One of the things I learned in counseling was that what I thought was happening with my emotions wasn't.  I thought that emotions didn't affect me.  I could make anger vanish.  I felt that I had everything under control.  I was so mistaken.  My counselor taught me to slow down my emotional reaction to find out what really happened in my thought process. First, comes hurt, fear or frustration, then comes anger.  To demolish the anger, I used depression.  That's right depression was my emotion of choice over anger.  To cope with depression, I dissociated which made me numb to all other emotions.  I emotionally checked out.  This is not controlling emotions. This is abandoning them all together.  Someone once told me it would be great not to feel anger or depression.  Well, there is a down side.  When I shut out anger and depression, joy, happiness and love go with them.  KavinCoach taught me that dissociation is kind of an all or nothing reaction.  How completely a person can dissociate is on a sliding scale.  I went so far down the dissociation continuum that I could make anger vanish.  I wouldn't have so much as a twitch of muscle to indicate to someone else that they are up %&*# creek with no paddle.  Then I added one more cutesie little step, my mind would obliterate the memory, until the next time a similar event occurred then the past anger would be added to the new one and the whole process would begin again.  I became very efficient at doing this.  To tap into this buried anger, my counselor asked me to buy clay pigeons.  They are used for skeet shooting.  http://claypigeons.com/ They come in boxes of 90.  The assignment was to throw the clay pigeons against a wall and shatter them.  I carefully laid out a plastic drop cloth to catch all the pieces then I let them fling.  At first, it was like throwing plates at the wall.  Then I wrote a memory that I felt angry about on each one.  Then as I threw that disc at the wall, a ferocious anger surged forward.  I shattered all 90; I bought another box.  I smashed another 90.  My kids always tell me that I do things to the extreme.  When I came back to counseling, I excitedly talked about smashing all those orange clay pigeons.  KavinCoach just listened.  When I finished, he calmly stated, "You have a lot of anger."
I innocently responded, "Why do you say that?"
He shifted in his seat before answering, "Most people don't make it through the first box."
Oh dear. 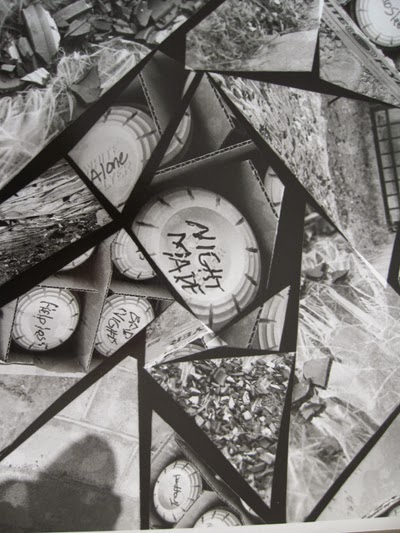 I like how you took that anger and made this photo.

Actually made this print in the dark room with multiple prints cut up and taped back together.

Wow, it is beautiful.